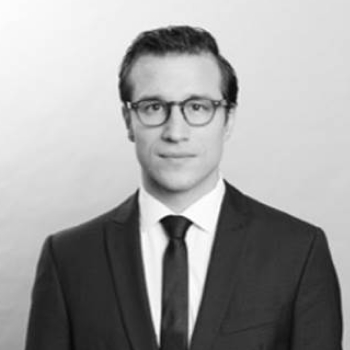 MSc. ETH Moritz L. Breitenbach studied Interdisciplinary Sciences at the ETH Zurich, the University of California Berkeley and Stanford University with a focus on biotechnology and biochemistry as well as chemistry. With a thesis on the latency of HI viruses at the University Hospital of Zurich, he completed his studies in 2010 with a Master of Science degree.
From 2010 to 2013, he worked as a management consultant for one of the world's largest management consultancies.
Since 2015 he has worked as an independent patent professional. In 2016, Moritz L. Breitenbach became a German Patent Attorney and in 2017 a European Patent Attorney. Since 2016 he has worked as a patent attorney with his own private practice.
Since October 2016 he has also been working in the patent department of a leading German medical technology company.
In 2018 he successfully completed the IP Law and Management course at the University of Strasbourg. He completed his studies with an LL.M. based on a thesis of the protection of digital business models using IPR. Since 2019, he has continued his work on the protection of digital business models using IPR with a research project as part of the Diesel Medal Postgraduate Programme.
Since 2020 he works for ZIEBIG & HENGELHAUPT.